Born in Ashland, OR and trail tested in the Klamath Siskiyou mountains 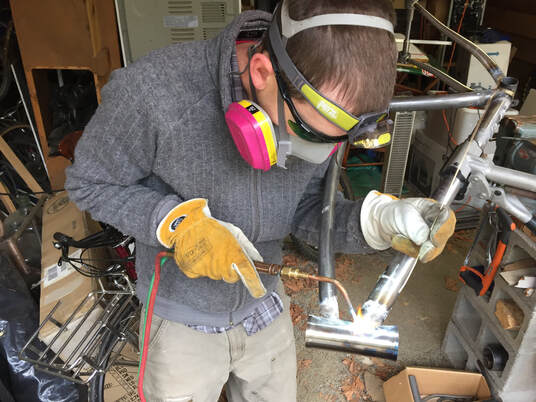 The Company:
My name is Will Scharen and I founded Scharen Cycles as a one-man workshop building bicycles in beautiful Ashland, Oregon - just a few miles north of the California border. I strongly believe in an active lifestyle and how your health and happiness can be enhanced - even transformed - by bicycling. Whether it's a quick trip to the store, an after-work singletrack rip, taking a long ride through the countryside, or riding the Great Divide from Canada to Mexico, I want to you to be on a bike you love to ride. I want you to smile every time you get on your bike - every time you even think about your bike.

The Bikes:
I build steel bikes with a technique known as fillet brazing. In this process a bronze filler is melted into the joints with a gas torch, creating a chemical bond with the steel as well as a built-up area to withstand the stresses of riding. Rather than build up a large fillet and spend hours filing and sanding, I prefer the utilitarian beauty of the raw, functional fillet - and I feel like there's a kind of honesty in showing the torch work. See the gallery for examples. My focus is on hardtail mountain bikes and gravel bikes, but other types of bikes will be considered for a custom order. Contact me if you have a vision you'd like to bring to life.

Will Scharen, The Builder:
I have been a bike rider and enthusiast since I was a small child. Growing up in the foothills near Bozeman, MT, mountain biking took hold in junior high and never let go. After a few short years of racing, I decided that bicycling was more fun without the pressure to perform at a certain level. The idea of building bicycles came after attending the North American Hand-made Bicycle Show (NAHBS) in 2013. At the time, I was  working mainly as a musician and music teacher. After three degrees and thousands of hours of devotion towards a career in music I started to wonder whether I was on the right track. I had always been handy and a natural designer and wondered if making things rather than sounds was a better career for me. As opposed to the transient nature of music, I realized the bicycle is also an object of beauty but with tangible utility that can last many years. This realization had such a strong appeal that I immediately signed up for a frame-building program at the United Bicycle Institute, one of the best schools of its kind. Scharen Cycles was founded shortly thereafter. Every Scharen Cycles bike is made with the same artistry and technical focus that I cultivated as a classical musician. (I still play music, by the way.)